Master Kaku Ryo who is the founder of Keitankou and the leader of dissemination of  Chinese culture and world peace was born in Xian China.

Chosen as a professional martial arts athletes of national than I was a young small, leaving the excellent results. Although renowned

as a national first-class martial arts umpire, is then attacked by a

serious illness, independence walking becomes impossible, was forced to desperate life. However, I revived the excellent Chinese traditional culture ” Qigong” Gakuruwa teacher as phoenix. Taking this opportunity, than ever before was overlaid qigong Shuren, and began to play a more numerous Chinese and protagonist of kung fu movies and dramas of Hong Kong as Qigong house.

Guo teacher is to give enlightenment to large Michizane Gong, and thanks to its favor, in order to invite people to the happiness of the road, was founded finally the ” ToshiMakotoGong”. Since coming to Japan in 1988, China’s  government officials in  the  “Great therapy” of ToshiMakotoGong, Japan’s former Prime Minister, royalty, parliamentarians, the financial community of the tycoon, showbiz and sports, celebrities such as sumo  wrestlers  and  Hollywood  I  saved  the  people  of a number of incurable diseases, including. Those of bedridden or wheelchair, seriously ill patients over several decades, also numerous miraculous if case that it is possible to walk whopping In a few minutes. By the force of exactly supernaturally, I brought the newborn to the intractable disease patients are said to be “incurable disease” currently in medicine.

Sun Yat-sen’s grandson, the  Magoho Kaoru woman officer has been praised as” Maki “.

Hollywood movie star, with Mr. Steven Seagal to become a relationship such as” is a teacher friend of mind “, from  Wang Yi said the Chinese Minister of Foreign Affairs and was referred to as “Bunburyodo gurus”.

Lecture of ” air force” in the House of Representatives, and was made a demonstration of instant therapy of miracle is the first person in Japan.

Such a track record becomes a place where the world will recognize, at the Imperial Hotel November 20, 2000,  and is the first Chinese in Japan, which was  awarded the Japan” Social and Cultural Achievement Award ” from the Heisei Emperor cousin Rokujo YuYasushi Prince. Sri Lanka  Pelpola Vipassi pope in 2004, visited with the monk, I was awarded  the World  Religions Vatican-world  religion Federation as ” the  highest  honor Medal ” the title of ” honorary chairman “, Articles for Guo Liang teacher were serialized 17  times  in the  Kokkai  Times, in which  his achievements are praised as ” a person of Chinese mysterious culture.

Beginning a martial arts coach, such as karate, aikido, kendo, kung fu, from many others of people, is praised as ”  Guo teacher of Tai Chi is the most beautiful in the world “, was shed the excitement of tears. Some of the students of each country that

Guo teacher was brought up is, there is also a player who won the Tai Chi champion in

by Qigong scientific experiments and measurement of brain waves that were carried out in TBS television or the like, superhuman special abilities of Guo teacher has been verified.

① Hollywood movie star Steven Seagal Mr. praised … “led a big star in the health and happiness of the world! The rice gratitude, was a gift a Thailand trip” 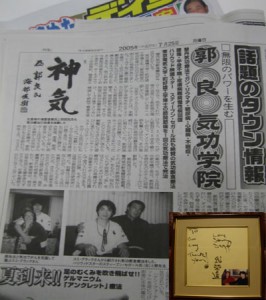 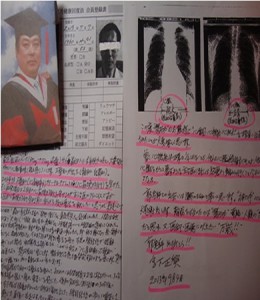 ③ It is said that there is no cure for an intractable disease, Amyotrophic lateral sclerosis(ALS) even with the cutting-edge medical care in the world・・・”It completely healed！There are no words to express this emotion and happiness！！！”