Hollywood movie star Steven Seagal Mr. praised … “led a big star in the health and happiness of the world! The rice gratitude, was a gift a Thailand trip” 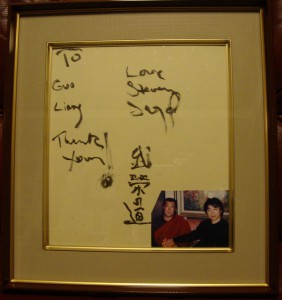 Tokyo Denki University-town Yoshio engineering doctoral also I received a Qigong “KakuRyo director but, clearly hurt his knee in .7 late that we had is effective joint, I was received only at the moment treatment once but, it does not have anything even now disappear pain. Although scientific validation of the gas have been made many times, thermography and blood flow meter, etc. ultrasonic echo, and 30% before and after the blood flow after you turn on the air you are talking about an increase of it has been confirmed, “said.

Sumi Gluck’s Japanese Americans, said from life expectancy six months and American physicians in end-stage cancer,
Listen to that of KakuRyo director from a friend, I visited the Shinjuku KakuRyo Qigong Institute Tokyo. So continue to receive the qigong treatment of the director, upon receiving the test at the hospital and I returned to the United States one month later, the cancer cells was 3.5cm has been reduced to up to 2.8cm, also Awesome American doctor.
Then also continue to receive the qigong treatment of the director, went finally cancer disappeared completely. In Qigong treatment of Guo director, Mr. Sumi Gluck is alive with energy even just 3 years. The thing is I was frequently also included in Sumi’s Hollywood star Steven Seagal’s ear that had come to play in the home from an early age.”Silence” visit to Japan in his 17-year-old famous also in the series, to stay between than 15 years in Japan, and has aikido, judo, kendo, a deep knowledge against karate.Seagal Mr. heard that Sumi’s terminal cancer has been cured, visited the original Guo director. February last year, in the guidance of Sumi-san, Seagal said Japan in the private plane, invited Guo director to the accommodation of the hotel, was chatting in the suite room.
Kakuryo director proposed the Kei-tan-ko fasting therapy Seagal said. This got the “care” from Guo director every day, nothing’s only the drinking water therapy, which was subjected to a “care” of the director is not put in mouth. Seagal said the proposal of this errant is pleased he has accepted. After this date, Mr. Seagal went to Institute of daily Guo director. Treatment lasted 10 days, since Segal’s physical condition is getting better, further extended 2 days in order to enhance the effect. In fasting total of 12 days, was also wiped out many years accumulated fecal impaction. During the fasting period, he is without having to interfere with daily life, work also has been doing without the same as usual. Seagal Mr. surprise to this treatment of Guo director, that was impressed. After the treatment has settled down, Mr. Seagal but he went to Thailand for a movie shoot, was a gift to Thailand travel with great gratitude to Guo director.

Kei-tan-ko fasting therapy of Kakuryo director performs a housecleaning of the body, there is an effect on a variety of incurable diseases is not only diet. Director has not only treated the former prime minister and various fields of famous people of Japan, is the led to health and well-being also the big star of the world.
（And published in the Daily Sport newspaper in July 2005 dated 25 “topic of Town Information Corner”）