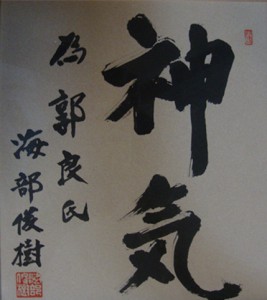 September 25, at the Hotel New Otani Tokyo, “the People’s Republic of China founding 53 Anniversary” and, the party of “medium normalization of diplomatic relations 30 anniversary day” was held grandly. As a distinguished guest of the Chinese Embassy, invited the KakuRyo teacher, has received a special gift from Mr. Sasaki is the secretary of Kaifu Toshiki former prime minister. It is two letters Bokusho “Shinki” by the autograph of Mr. Kaifu. And appreciation for that had you heal the disease was transmitted.

Prehistory of the matter is as follows.
August 21, KakuRyo teacher, has been invited to Kaifu’s office in Nagata-cho. When you visit the office, pick-up and are willing Kaifu said, and told us to “? Good” “welcome?” In Chinese to hold the hand of KakuRyo teacher.
Kaifu said earlier, my daily life under that hurt his leg skiing, suffer from pain, was desired treatment in China qigong KakuRyo teacher.

First of all, from first to our drinking water Qigong to Mr. Kaifu, Qigong therapy began. Mr. After a few moments after the start of treatment Kaifu is, did you rest soundly by outside air movement generated by the KakuRyo teacher. Thanks to the care of efficacy, it was still you do not wake up even when the phone is Written lightly snoring in deep sleep state.
After treatment, Kaifu said it “was clean. It was much better, and take it got better. Many years of tired, this comfortably was able to relax is a really long time.” While the sleepy face and told us was.

Come once, to the effect that I would like you to therapy together wife also came to the home, and has been your request through Sasaki’s secretary. Of course KakuRyo teacher, was willingly acknowledge.
（Chubunshirube-ho October 24, 2002）